Last night I was planning to watch a movie before going to bed but I was so tired I went to bed at 7:30 (Alaska time). I set my alarm for 6:00am both because we were scheduled to dock at Ketchikan at 7:00 and also to get myself somewhat back on Pacific time. When I got up I only walked a mile around the deck and then went to the buffet for breakfast.

Not surprisingly, it was raining in Ketchikan. I had thought about going on another hike but my body was still a bit tired from yesterday. Plus, I had to be back on board ship by 12:30 so it didn’t allow for a lot of time. Instead, I decided to wander around town. Unfortunately, only the super touristy shops were initially open. I can’t figure out why there are so many jewelry stores around the docks of both Ketchikan and Juneau. Why would I buy stuff on an Alaskan cruise that I could pick up anywhere else? 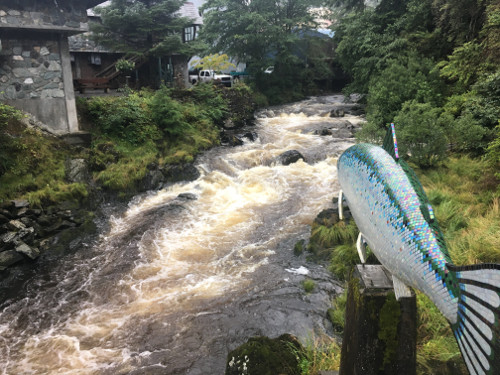 I stopped by Artic Spirit Gallery and bought a butterfly print. I talked to the owner for quite a bit and he said I should go to the Totem Heritage Center. It was already on my list of possibilities but based on his recommendation I decided to do that next. On the way, I stopped by Parnassus Books & Gifts. When I had first looked them up, Google had said they weren’t open til 10:00. However, it was open well before 10:00 today. I picked up a book for Julian and one for Calvin (because neither have enough books).

The Totem Heritage Center was very interesting. It provided more context than I had gotten the previous day from the Totem Trail (though, to be fair, I didn’t listen to the audio tour so possibly that would have gone into more detail). Unfortunately, my back started hurting while I was walking around which distracted me a little bit. I must have done something to it while hiking yesterday but nothing obvious springs to mind.

I walked back to town and was contemplating going back to the ship early. However, I meandered around town instead. I went into a Salvation Army thrift store and found a Lightning McQueen life jacket. However, given Julian already has a good life jacket, I did not purchase it. Next, I stopped by Crazy Wolf Studio and admired all the art. I ended my Ketchikan experience by visiting the Southeast Alaska Discovery Center. It wasn’t huge but had a variety of exhibits and was definitely worth the $5 entry.

Since it was almost time to leave anyway, I went back to the ship for lunch. Then I went back to my room and took a nap. I was a glorious nap. The kind where when you wake up you’re still floating in a delightful haze. Eventually, I did wake up all the way and spent the rest of the day reading until it was supper.

After supper I walked two miles around the deck and then soaked in the thermal pool for a bit.

In retrospect, I think I probably should have made a hike work, in spite of the short shore time, rather than wandering around the town. I seem happiest when I don’t have a lot of other people around me.

Tomorrow we going to Victoria, BC. However, we don’t get in till 6:00. I’m planning to spend most of the day reading. I’m still debating whether or not to get off the boat in Victoria. It might depend on how much reading I get done. I can visit Victoria sometime with my children. It’s much harder to get time alone to read.