Today we arrived in Sitka. We were suppose to get into port around 8:00am and I was planning a long hike so I didn’t bother walking the deck this morning. Also, I didn’t want to wait for breakfast in the dining hall so I braved the buffet instead. Given I was planning a reasonably ambitious hike and wasn’t sure I would get lunch, I ate a fairly large breakfast. After breakfast I had just enough time to go downstairs and double check my plans before it was time to disembark. 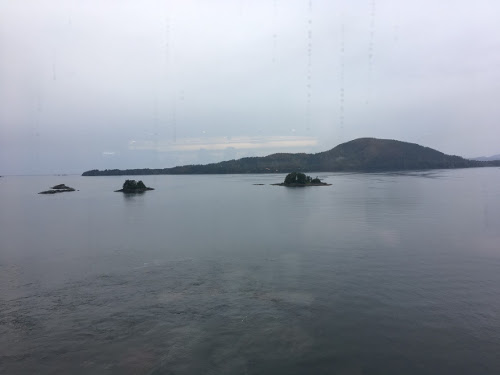 Oosterdam docked at the Old Sitka Dock at Halibut Point Marine which is about 5 miles away from downtown Sitka. Fortunately, they had shuttle buses to get us downtown. Once the bus arrived I double checked all my time assumptions and then headed off on my hike.

My plan was to hike the Indian River Trail and hope I had enough time to get to the falls before coming back. First, I had to get the the trailhead which was about a mile away from where the shuttle bus dropped us off. There was a city bus, which would have gotten me very close, but I suspected that it would be faster to walk. I think this assumption was correct as the bus did not pass me on the way. It rained but I had my wool socks, raincoat, and a cover for my backpack1. On the way I passed a cemetery which looked more like a park than a cemetery. The graves were nestled in between trees. It looked really nice. I’d definitely like being buried in a setting like that.

I did take a little, slightly unintentional, detour on a trail along Yaw Dr. It was pouring so I was amused to see a bench with the sign “Here comes the sun”. 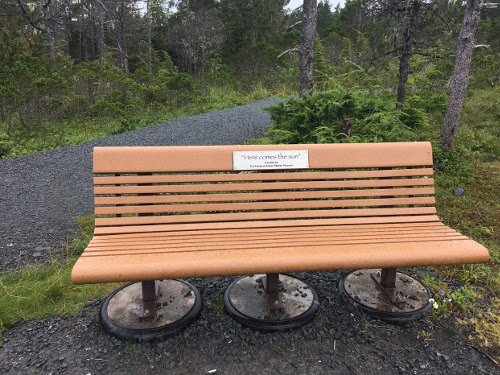 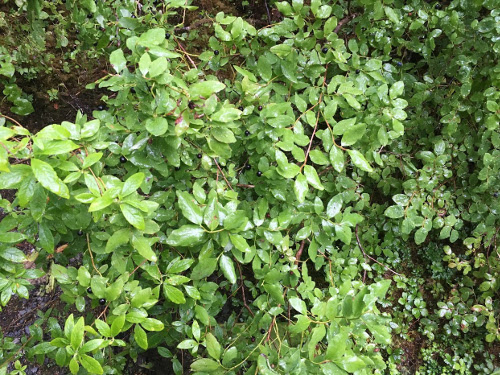 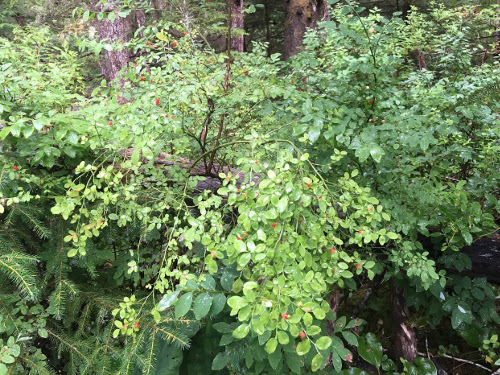 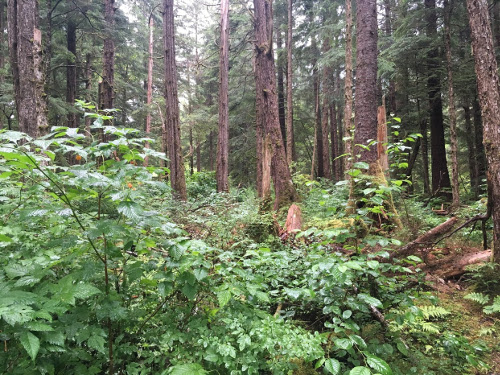 I don’t think I’ve seen so many (non-blackberry) berries in the wild before. The hike was gorgeous. 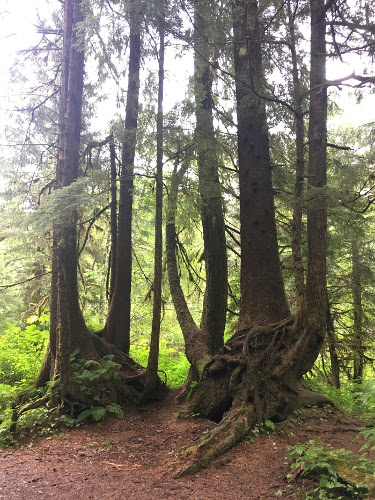 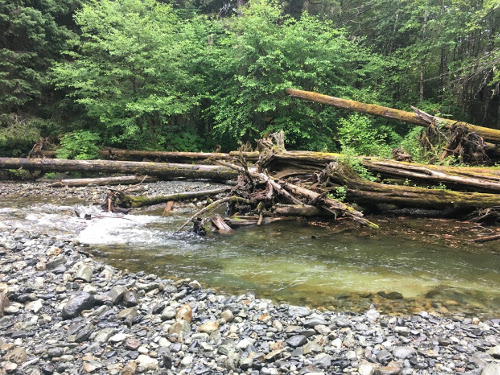 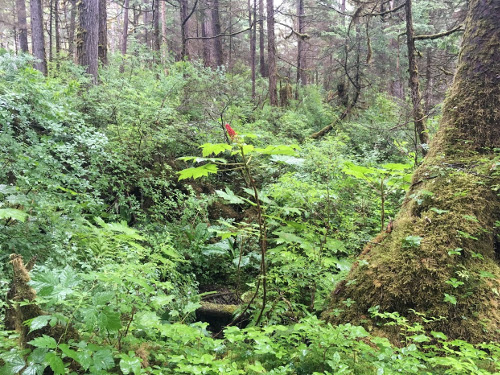 I was fascinated by the bridges they built for the trail. They took what I assume was original trees and augmented them with supplies brought in. The bridges were very sturdy. 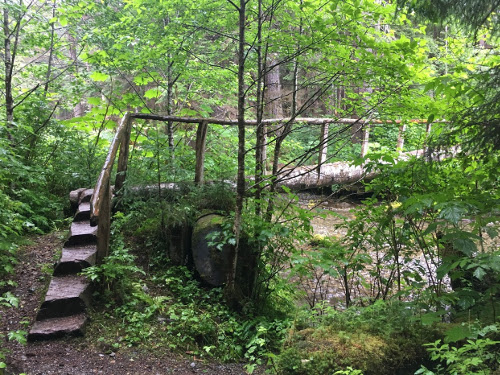 The path was very clear until it wasn’t. I was probably about a mile away from the falls when the path disappeared into a thicket of salmon berry bushes. 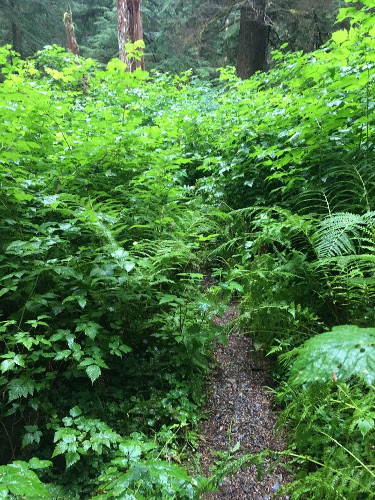 I could see that the path continued under the bushes but it looked more like a deer path rather than a path made for humans. I double checked the way I had come and confirmed I was definitely on a human path which appeared to continue through the bushes. So, I went through the bushes. I mentioned it was raining? The bushes got me sopping wet. From that point on I went through multiple salmon berry thickets while staying on the trail and it was the wettest I remember getting in recent memory. The water soaked my hiking pants and then ran down into my socks so I started squishing as I walked.

At one point the path was what looked like a seasonal creek bed and I missed the turnoff for the real trail and ended up off the trail facing the remnants of a rock slide. For a while I couldn’t figure out if the rock slide was the trail or if I had made a wrong turn. Eventually, I figured out the wrong turn and got back on the correct trail.

Because I needed to make sure I was back on the cruise ship before it left, I had set myself a soft deadline of 11:00. Soft in that if I thought I was close and heard the waterfall I’d continue up to another 15 min but would turn around right at 11:00 if I thought I wasn’t close. I was starting to get nervous because it was almost 11:00 and I hadn’t heard any obvious waterfalls yet. However, I ran into two Forest Service people, the first people I had seen on the trail, and asked them if the waterfall was close. They told me it was right around the corner. Right as my 11:00 alarm went off I arrived at the waterfall. I rested briefly at the waterfalls and drank most of my remaining water. I thought about eating some snacks but at Mendenhall Glacier that were very adamant that one not have food because of the bears. So, I decided to play it safe and not open up my snacks at Indian Falls either. Walking back was a lot quicker. Both because I didn’t have to wonder if the path really went through various salmon berry thickets, it did, and also because it was a slight slope downhill rather than up. From the trailhead, it took me about 2 hours to hike to the falls but only about 1 1/2 hours going back. On the way out I ran into a random gnome village in a tree. It was not what I expected to see in the forest but it did add interest. Once I got back to the main road I got out my snacks and started eating “lunch”. I was ahead of schedule and decided I could get in one more attraction so I walked to Sitka National Historical Park and wandered around the totem trails. 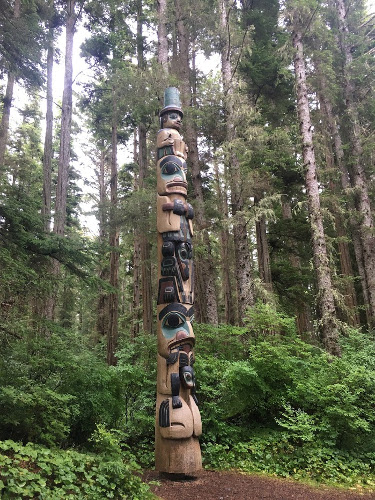 They were really interesting. I would have liked to have spent more time there and listened to the audio tour but I didn’t feel like I had enough time to listen to them all. Part of the trail was parallel to a river and I glanced out and saw what I assume was salmon spawning. There were just masses of fish. I also got to see several bald eagles hunting the fish (though I was unable to get pictures).

After a quick walk through the totem trails I headed back to the bus. I made it back onto the boat with about a 1/2 hr to spare (before we were due back, not before the boat left). My clothes had mostly dried by the time I made it back to the boat. However, my shoes and socks were still sopping. Plus, it turns out I had somehow collected a huge number of pine needles in my shoes. Not sure how that happened. I had eaten a couple of energy bars for snack but decided to go up to the buffet to see if there was anything else I could eat to tide me over till dinner. I was hoping they had chocolate milk but settled for tomato soup instead.

After the snack I headed up to the therapy pool in hopes of mitigating some of the aches due tomorrow. It was the busiest I’ve seen it. Not sure if everyone else had the same idea or not. (Though, I’m willing to bet I hiked farther than anyone else.)

I came back to the room and read a bit before the dining room opened. I was delighted to sit with the same people I had the previous night. The prior night I had talked about my hiking plans and one of the gentlemen was obviously worried about me going hiking by myself. So, I was happy he could see I made it back on board without any incident.

I’m very tired. I’m contemplating watching a movie for the rest of the evening but I may not have enough energy. Tomorrow we get into Ketchikan around 7:00am and have to be back on board by 12:30pm. I don’t think I’m going to go on any hikes tomorrow (among other things, I doubt my shoes will be dry by then). However, I might try to get up at 6:00 to start getting me back to Pacific time. I have a feeling getting up at 6:00 Pacific next week for work is going to be very hard.