This last August I started dreaming about cats. They would randomly show up in my dreams and just hang out, purring. Then I would wake up and be sad not to have a purring cat next to me.

It’s been over a year since Willow died. She’d been with us for almost sixteen years and had lived in every house we’ve ever owned. It was both sad and weird to not have her around. For quite a while it felt a bit overwhelming to think about getting another cat. However, once I started dreaming about them I figured it was time.

I talked to Jaeger about getting a new cat and he was fine with the idea. I was thinking about looking for a bonded pair, so the cats could keep each other entertained. However, Jaeger leaned toward one cat. Regardless of the cat numbers, I didn’t want to do anything hasty. Every so often I’d go online to look at the cats available at the nearby animal shelters and wait for inspiration to strike. I had some basic criteria: I wanted a cat who was cuddly, a good purrer, and didn’t hate children1. However, I looked at the lists of cats and couldn’t figure out what would cause me to choose one over another.

Last Friday I was getting ready to take the kids to school when I noticed a cat outside our front door. I decided to go out and see if the cat would let me pet it. It did but, as I was petting it, I noticed how thin it was and how matted its fur was. The cat looked like she was in pretty poor shape so I took her inside, so she wouldn’t wander off, with plans to post on Nextdoor and/or take her someplace to see if she was microchipped. She looked kind of rundown but had beautiful markings. A very handsome cat. Also, she was obviously use to people and was very friendly.

It turns out she was a neighbor’s cat. Jaeger had seen her once before, though she seemed in better condition at that point. My hypothesis was she must have been sick which is why she looked like a stray. The neighbor who responded wasn’t actually the cat’s owner so I didn’t get the full story. However, the neighbor did say that the cat is allowed to roam oatside. Based on that, I didn’t feel like I could keep her trapped in our house. So, I let the cat out and she happily trotted off back down the cul-de-sac and clearly looked like she was headed home. I haven’t seen her since. We fed her while she was here. In retrospect, she didn’t eat an excessive amount, just some of the wet food. In any case, I assume if she actually was hungry she would have come back for more food later and she hasn’t.

I was a bit disappointed because I thought maybe the universe was sending me a cat and that turned out not to be the case. However, it did emphasize that I really wanted a cat. I took a look at the animal shelter pictures again and came across a cat named Waylon2. Waylon was around one year old and described as very affectionate, loves snuggling, and purrs enthusiastically. Also, he was an orange cat. Nimrod3, my very first cat as a kid, was an orange cat and he’s the standard I judge all other cats against. He was very vocal and had a wonder purr4. I decided it was a sign and talked Jaeger into going down to the animal shelter with me on Saturday.

Saturday afternoon we loaded the kids into the car and headed off to the animal shelter. When we got there, they asked us what traits we wanted in a cat and then took us around pointing out some cats who might meet our criteria. We came up with a list of five cats and then went back to the desk where they looked them up and gave us some brief information about each of them. One of them we excluded based on past history as it seemed like she became stressed around children. That left us with four cats that seemed like good candidates.

The first cat we visited was named Evanescence. She was just over one but had already had a litter of kittens5. She had caught Jaeger’s eye because she was enthusiastically trying to interact with us when she was in her cage. However, in the visiting room she mostly ignored us, running back and forth between the two glass doors. It seemed she wasn’t interested in us as much as getting out and exploring things. Understandable, but it didn’t give us enough information to know if she’d be a good fit.

While we were waiting for our next cat, one of the volunteers asked if we wanted to hold the cat she was holding. We said sure. On the upside, the cat sniffed Julian’s hand and didn’t instantly recoil. However, she wasn’t quite what we were looking for so they took her back. Unfortunately, she had a cold so we all had to tromp into the bathrooms and wash our hands before we could see the next cat.

The next cat was named Motherboard and I’m fairly certain she ended up on our list because Jaeger liked the name6. Motherboard seemed pretty promising. She was affectionate and seemed to like Julian a great deal. However, I still wanted to see the others.

The next cat we visited with was Rio. She won me over pretty quickly with her very loud purr. She was also the only cat who was interested enough in Jaeger to actually jump up into his lap7. After visiting her, I was fairly certain she was going to be our choice. However, we hadn’t visited with Waylon yet, the cat that enticed me into the shelter to begin with.

When we visited with Waylon it quickly became apparent he was not the right cat for us. It’s true he was cuddly but more in a “please hide me from the world” sort of way. The volunteer handed him to me and he jammed himself into my arm and tried to ignore that the rest of the world existed. If we didn’t have kids I still might have considered him. However, we felt that even fairly well-behaved kids would probably be too overwhelming for him.

After seeing all the cats, Rio was the clear winner for our family. 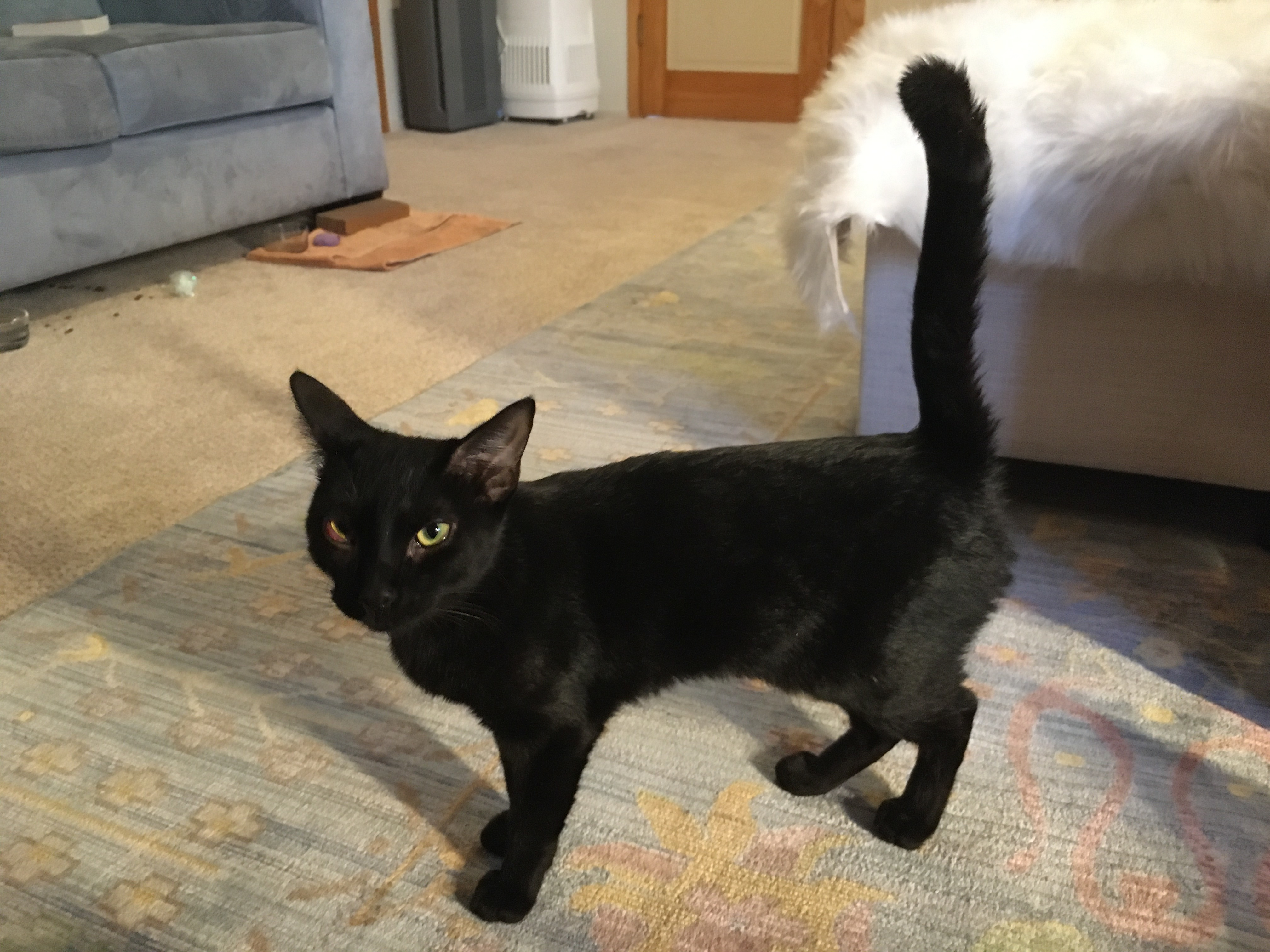 We brought Rio home and I let her out in our master bathroom. I had closed all the master bedroom doors but had left the door between the bedroom and bathroom open. She sniffed around the bathroom for a few minutes but once she got into our bedroom she headed straight under the couch and refused to come out. She stayed there all afternoon. I finally managed to coax her out around 11pm after the kids had gone to bed and the house had quieted down significantly. However, once she was out, she seemed fairly comfortable. Unfortunately, I noticed that the bottom of her left eye was swollen and she was sneezing a lot. This wasn’t too surprising, as quite a few cats at the shelter had colds, but the shelter hadn’t tagged her as a sick cat.

I went to bed around midnight and she quickly followed me into bed. I learned that she really liked burrowing under the covers. I had heard of cats sleeping under covers before but my cats never had so it was a novel experience for me. She is a fairly well mannered sleeping partner, at least for a cat. She kept up a nice purr but didn’t do any meowing during the night. She also didn’t insist we stay awake and entertain her by raking her claws across my face (Cat5 would do this). 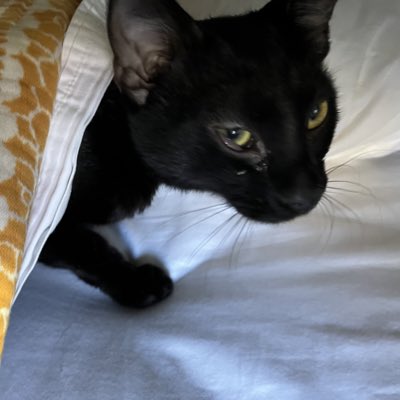 Given Rio had slept with us all night, I thought she would be more comfortable on Sunday. However, as soon as we got up she disappeared under the sofa again. My original plans for the day included cleaning the master bathroom. However, I decided that many smells might make Rio even more nervous so decided to skip until next weekend. I spent a good portion of the afternoon sitting on the sofa hoping she’d come out but she stayed firmly underneath.

Jaeger had gone to a concert and Calvin went to a Renaissance fair with a friend so it was just Julian and I. After supper, we watched Netflix’s “Inside the Mind of a Cat” which we both found pretty interesting. Among other things, it talked about how cats like to be treated so I’m hoping Julian picked up some useful dos and don’ts.

After I put Julian to bed, I went back to our bedroom and Rio came out and sat on my lap until my bedtime. I went to bed and she happily followed me like the previous night.

Today, I got out of bed at my normal time but Jaeger and Rio continued to sleep. After I came back from dropping Julian off, I went to our room but couldn’t find Rio. I started wondering if she had escaped out of our bedroom. However, I eventually found her under the duvet. It turns out what I thought was a wrinkle was actually Rio. Her eye still looks bad to me so I called Willow’s old vet to see if I could get an appointment for today. However, the vet was out sick and they weren’t accepting any new animals. I called a couple of other places and none of them were accepting new pets. I was starting to panic when I finally found a place accepting new patients. They had me fill out a form and will contact me to schedule an appointment “within 48 hours”. Not as fast as I would prefer but at least it’s better than nothing.

Rio seemed much more comfortable in our bedroom today than previous days. She wandered around a fair bit, included a brief visit to my office. She spent the majority of the day under our bed. However, she seemed more relaxed than the previous day. 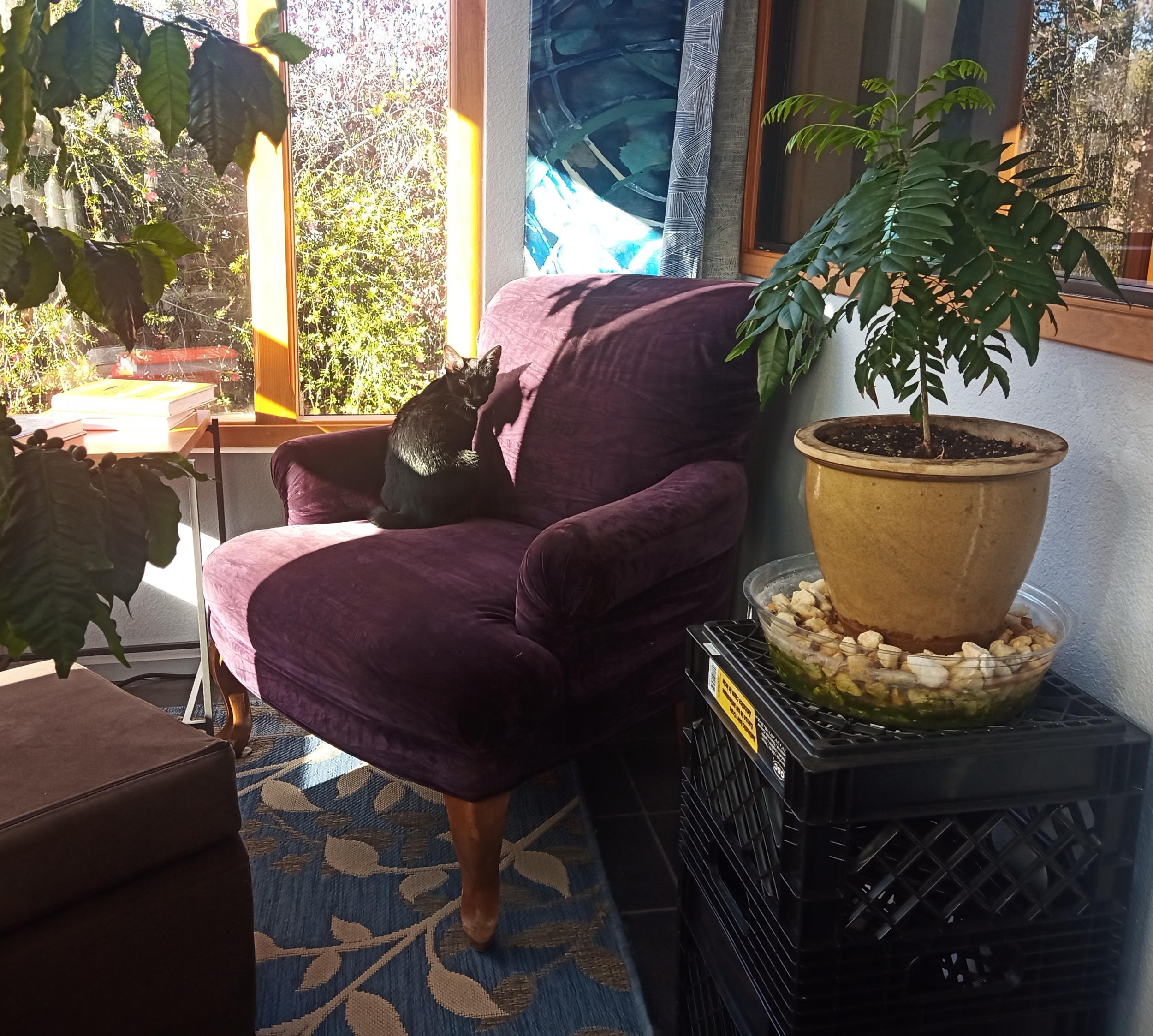 Now that it’s evening Rio is once again out. She’s currently sitting on Jaeger’s lap. Though, she did spend a bit of time chasing the laser pointer. So far I can verify she’s a very cuddly cat and has a great purr. Given she mainly has emerged in the evening, we have yet to see if she’ll get along with Julian. I’m crossing my fingers. Regardless, she seems a good fit for Jaeger and I. 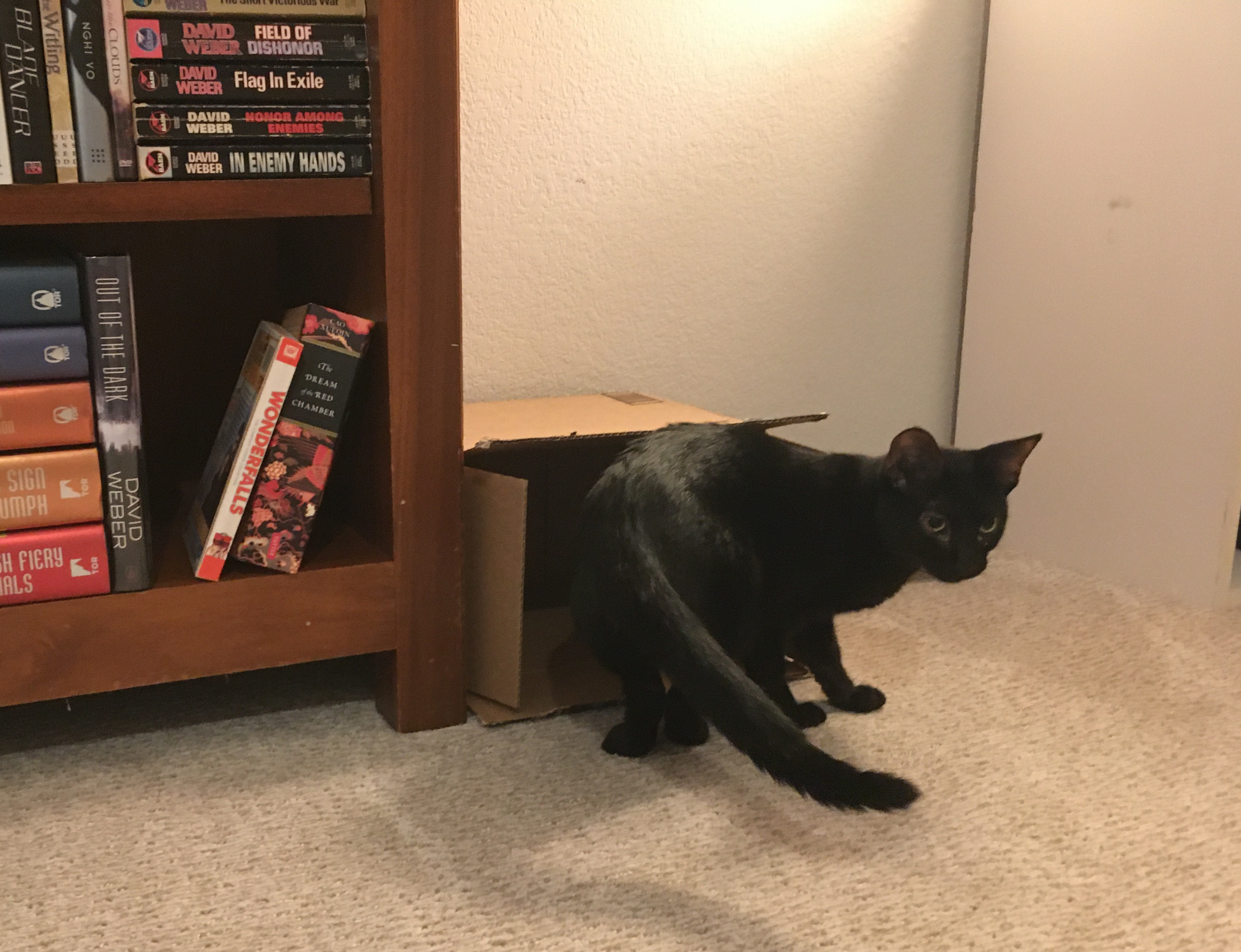