I slept really well last night. Except, it turns out that I forgot to bring my nighttime audiobook phone with me. I improvised with the mini iPad but it doesn’t work as well since the sleep timer setting isn’t sticky so it can easily drone on all night unless I wake up enough to turn it off but not enough to need it to go back to sleep. I remembered to turn off my 6:00 AM work alarm. However, I forgot to turn off my 6:55 AM bus warning alarm. So, I woke up at 6:55 AM. However, I already had more than 8 hours of sleep at that point so I decided to get up and walk around the deck for some morning exercise. I walked two miles around the deck again. There were quite a few whales. Unfortunately, I didn’t think to bring the binoculars and they were close enough I could tell they were whales but far enough away I didn’t really see any details.

After showering I went and explored the breakfast buffet. There was a very nice variety of breakfast foods available. However, I wasn’t fond of the seating. It was busy enough that there wasn’t a lot of seating available and there wasn’t any formal seating to introduce seat mates. I ate quickly and then found a nook to read in. I first tried the observation deck, but it was really busy and not really conducive to reading. However, there was an interesting LEGO model of the Oosterdam. Eventually, I discovered some nice seating outside the Lincoln Center room. 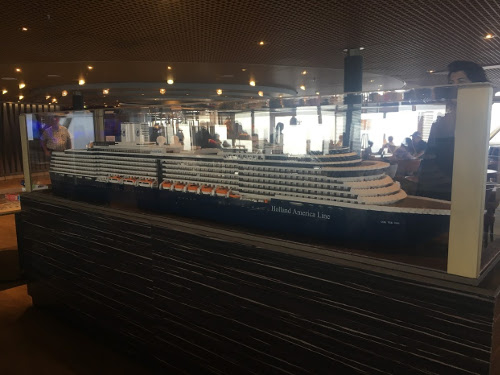 When booking the cruise I had decided to splurge on a pedicure. I was a little nervous about the whole thing because I’ve never had a pedicure before. However, I had terrible calluses on my feet so I figured this was as good a time as any to try it out. It was . . . fine. The calluses are gone and professionally painted toenails do look a lot better than what I can do. However, there was the whole awkward conversation bit. I think I might find massages more relaxing in the short-run but you can admire painted toenails longer than a massage. The nail technician did talk me into getting a manicure later on.

After the pedicure I came back to my room and read for a bit. Just as I was contemplating lunch, the steward appeared ready to clean my room. So went up to the buffet for lunch. Like breakfast I found the seating situation to be awkward. I decided it might make sense for me to take most of my meals in the formal dining room instead of the buffet. I might try that approach out tomorrow.

After lunch I had just enough time to finish my book before there was a cooking demo by America’s Test Kitchen. This one talked about chilies. Neither of the dishes were vegetarian (though I think one of them could be made vegetarian). However, the cooking techniques and tips were really interesting and I’m definitely glad I went. After that I went to an “Ask the Captain” session where the captain talked about the boat. It was fairly interesting but I was getting sleepy so I slipped away once the captain started taking questions from the audience.

I took a nap and it was glorious. After my nap I briefly caught up on email and then decided to get ready for dinner. Tonight was a “gala” night so guests were expected to dress a little nicer than usual. Though, in practice that appeared to vary a great deal. I was seated at a table with 4 other people, all southerners and a very different demographic than my first group. However, I decided that even if we were polar opposites in many ways 1, it was good to be familiar with other perspectives.

After dinner I decided to go use the Thermal Pool2. It was really nice. In the pool there were metal bars along one side that were shaped similar to a lounge chair. So you could lean back and bubbles floated around. Kind of hard to explain but very relaxing.

I eventually got out and wavered between walking around the deck some more and going to a dance show. I eventually settled on the show. After it started, I decided I had made a good decision. Except, only a couple minutes in they had technical difficulties which they were unable to recover from. So, I ended up walking another two miles on the deck after all. Like the morning, I forgot the binoculars and there were whales. However, this time they were close enough that I could see them pretty well without magnification. Also, my (phone) camera is clearly not designed to take pictures of whales. If you look at the picture below you may see a black blip on the water. That would be a whale. 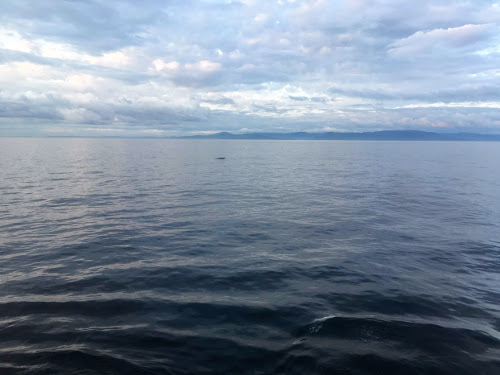 When I got back to my room there was a stingray waiting for me. 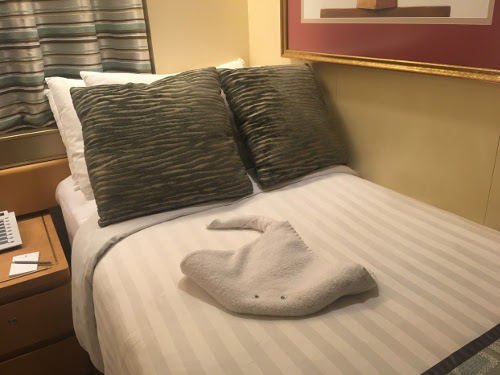 Tomorrow will be our first port day, in Juneau.